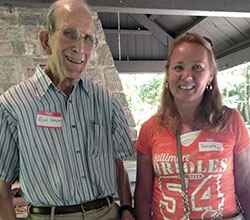 Robert Leepa of Ellicott City, Maryland has been selected as the recipient of the Hamilton Relay 2016 Better Hearing and Speech Month Recognition Award for the state of Maryland. Robert’s peers describe him as an organized, engaged and active leader within the community.

Robert has been an active member of the Hearing Loss Association of America – Greater Baltimore Chapter (HLAA-GBC) since 1998. Since that time, Robert has served on the board, led the organization as president and served as secretary. Robert also organizes and promotes many activities and speakers for the group, as well as continually recruits new members.

In addition, Robert developed and distributed a hospital kit specifically designed to facilitate communication between medical personnel and patients with hearing loss. Robert is also very active in his church and enjoys spending time with his family.

We commend Robert for his dedication to the community and passion for volunteering and are proud to present him with the Hamilton Relay 2016 Better Hearing and Speech Month Recognition Award for the state of Maryland.