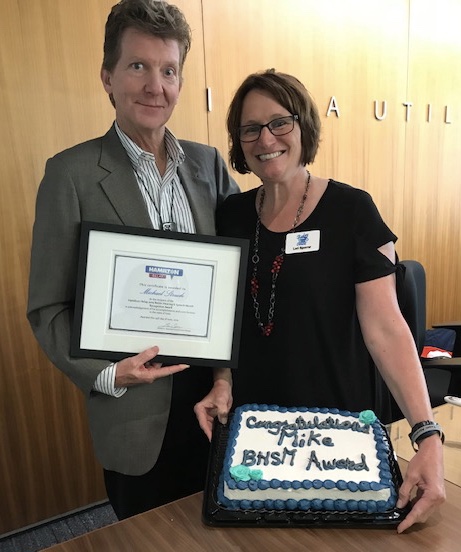 Michael Struck of Urbandale, Iowa has been selected as the recipient of the Hamilton Relay 2019 Better Hearing and Speech Month Recognition Award for the state of Iowa.

Michael is a Dual Party Relay Council member and has served as a volunteer on the Council for over 15 years. Michael is known as a strong, enthusiastic advocate for individuals who are hard of hearing. Even though his role on the Council is to represent people who are hard of hearing, Michael has made a point to advocate for people who are deaf, deaf-blind and those who have difficulty speaking as well.

Michael’s hearing loss began after college, and he has been an advocate for people who are hard of hearing since he tried his first pair of hearing aids in the 1980s. He has consistently stayed informed on technology as it changes to help ensure that communication technology is the best it can be for someone with a hearing loss.

On the Council, Michael is inquisitive and remains true to the programs while being a very careful steward of the budget and program goals. He demonstrates his knack for marketing by offering ideas and promotional approaches to support efficient and effective outreach programs for the state of Iowa. His passion to have as many people as possible know what is available to help them communicate on the telephone is evident in his work at council meetings.

In addition to his work on the Council, Michael has been a volunteer on the Clive Parks Board and currently works with the Polk County Deer Task Force. He is an author of four books: two novels, a business book on team building and a children’s book. Communication has been at the center of his career through his work in his own business and leading teams in both the telecommunications and IT industry in Iowa.