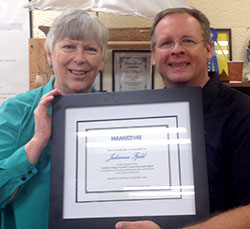 Julianna Fjeld has been selected as the recipient of the Hamilton Relay 2014 Deaf Community Leader Award for the state of California. Julianna is well known in in the Deaf Community on both a local and national basis. Through her talents, involvement in advocacy work and commitment to serving others, she has empowered many and made a positive impact in the lives of individuals who are deaf or hard of hearing.

Julianna is currently the Regional Director of Tri-County-GLAD, a subsidiary of the Greater Los Angeles Agency on Deafness, Inc. She oversees the operations that provide advocacy and services for individuals who are deaf or hard of hearing. She has worked in various capacities within the social service industry, including the position of Education and Outreach Coordinator for Abused Deaf Women’s Advocacy Services as well as Personal, Vocational and Social Adjustment Instructor for Goodwill of Southern California.

Julianna’s other passions extend to the artistic world. She is one of the founders of Project D.A.T.E. (Deaf Audience Theatre Experience) at the Mark Taper Forum in Los Angeles. Project D.A.T.E. made mainstream hearing theater accessible to individuals who are deaf by including ASL interpreting and assistive listening devices in regular performances. In the 1970’s, she toured with the National Theatre of the Deaf (NTD) and its offshoot group, Little Theatre for the Deaf. She later became Co-Artistic Director for NTD from 1991-1995.

Julianna is also an accomplished actress and producer. She has been featured in a number of stage and television productions, including “Dallas,” “The Trojan Women,” “A Christmas Carol,” “The Glass Menagerie,” “A Streetcar Named Desire,” and CBS and NBC Movies of the Week. She served as consultant and performed on Broadway in “Children of a Lesser God.” In 1986, Julianna won an Emmy for the Best Movie of the Week for her Co-Executive Producer role on the made-for-television movie, “Love is Never Silent.” In doing so, she became the first individual who is deaf to earn this recognition.

Julianna passionately devotes her time and efforts to enriching the lives of others and is a shining example of strength, determination and grace. She works tirelessly for the rights, representation and roles of individuals who are deaf and hard of hearing and we are proud to present her with the Hamilton Relay 2014 Deaf Community Leader Award for the state of California.