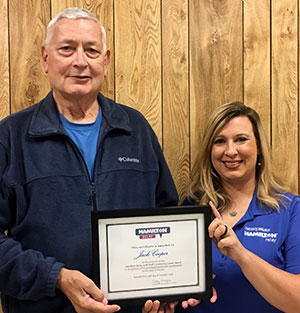 Jack Cooper of Gardner, Kansas has been selected as the recipient of the Hamilton Relay 2018 Deaf Community Leader Award for the state of Kansas. His peers describe him as kind, loyal and hard-working.

In addition, Jack served on the board for Kansas Commission for the Deaf and Hard of Hearing from 2008-2014 and is currently the chairperson of Kansas School for the Deaf Alumni Association Hall of Fame since 2011. He is a current volunteer for both Olathe Club for the Deaf and Museum for the Deaf, History, Arts, and Culture (MDHAC).

We commend Jack for his leadership and dedication to the community and are proud to present him with the Hamilton Relay 2018 Deaf Community Leader Award for the state of Kansas.