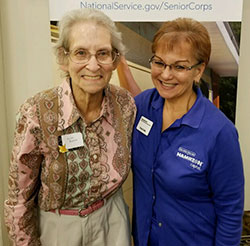 Elsa Baker of Harrisburg, Pennsylvania has been selected as the Hamilton Relay 2017 Better Hearing Speech Month Recognition Award recipient for the state of Pennsylvania. She is a committed advocate for the hard of hearing community and has been described by her peers as possessing standout perseverance to be part of mainstream volunteering.

Elsa Baker has been an RSVP volunteer since April 2004. Prior to that, she served at PinnacleHealth HomeHealth and Hospice and Jewish Family Services. Since coming to RSVP, Elsa has provided over 9,400 hours of service.

Elsa’s work with RSVP has included keeping staff and patient information binders current and readily at hand for current and new staff and new patients. In addition, she volunteers about 20 hours a week to Hospice of Central Pennsylvania and spends one morning a week with Affilia HomeHealth.

Elsa also keeps the “hours” book for RSVP of the Capital Region. For many years, she helped the RSVP Executive Director with a special group of RSVP Volunteers, the STARs, which consisted mostly of people with intellectual disabilities. The STARs sorted and repackaged food for RSVP’s After School Program in Newport.

Elsa is dedicated to making an impact in her community and we commend Elsa for her leadership and are pleased to present her with the Hamilton Relay 2017 Better Hearing and Speech Month Recognition Award for the state of Pennsylvania.