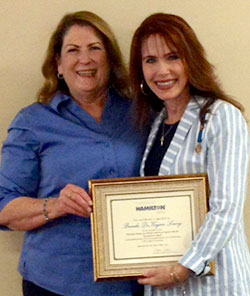 Brenda DeKeyzer Lowry of New Iberia, Louisiana has been selected as the recipient of the Hamilton Relay 2017 Better Hearing and Speech Month Recognition Award for the state of Louisiana. Brenda is described by her peers has having a “zest for life.”

Brenda is a musical performer and songwriter. She is a member of multiple musical groups, including Blue Merlot, B & B on the Rock, the Heavenly Choir and Whip of Chords at the Episcopal Church of the Epiphany. She is also a voting member of the National Academy of Recording Arts & Sciences. Brenda experienced sudden hearing loss, and because she is a musical performer, it has required a lot of adaptation on her part. Brenda states, “It can be done, and I hope that other musicians faced with something like this don’t lose hope.”

Beyond her musical involvement, Brenda is Chapter Regent of the National Society of the Daughters of the American Revolution. Through its volunteers, Daughters of the American Revolution promote patriotism, preserve America’s history, and secure America's future through better education. She is a former board member of Solomon House, an outreach ministry of the Episcopal Church of the Epiphany. She is also a member of the Sacred Center as well as Alpha Sigma Nu, the Honor Society of Jesuit Colleges and Universities.

Brenda is a Licensed Clinical Social Worker who spent over 15 years in practice, primarily in the oncology field. She is currently the office manager of her family’s businesses, hoh-Pak Laboratories and hoh-Pak Ltd.

We commend Brenda for her passion and leadership in the community and are proud to present her with the Hamilton Relay 2017 Better hearing and Speech Month Recognition Award for the state of Louisiana.