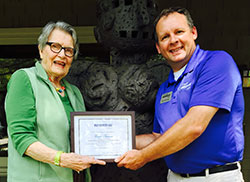 Grace Tiessen of Pasadena has been selected as the Hamilton Relay 2015 Better Hearing and Speech Month Recognition Award recipient for the state of the California. For over 30 years, she has been dedicated to providing education and resources to individuals who are hard of hearing.

Grace became active in Self Help for Hard of Hearing People (SHHH), now known as the Hearing Loss Association of America (HLAA), in 1984. She served as president of the San Gabriel Valley chapter from 1985 to 1990. Grace also participated in HLAA at a state level sitting on the California State Association (HLAA-CA) board of trustees from 1997 to 2011, serving in various roles, including corresponding secretary, vice president and president. She is currently the editor of the HLAA-CA state newsletter, The Hearing Loss Californian.

In addition to her work with HLAA, Grace serves as an advocate for individuals with hearing loss in her community. She was a member of the California Department of Education Advisory Task Force for the Deaf and Hard of Hearing and the City of Pasadena Commission on Accessibility and Disability. Grace also sat on the Board of Directors for the HEAR Center, a non-profit organization that offers affordable hearing and speech services to residents in the Pasadena area.

We commend Grace for her mentorship and tireless advocacy on behalf of individuals who are hard of hearing and are pleased to present her with the Hamilton Relay 2015 Better Hearing and Speech Month Recognition Award for the state of California.