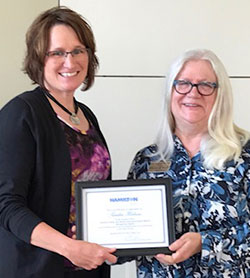 Sandra Hobson, Au.D. of Des Moines, Iowa has been selected as the Hamilton Relay 2017 Better Hearing and Speech Month Recognition Award recipient for the state of Iowa. Sandra’s passion as an advocate for people who have a hearing loss is always apparent in her work and volunteerism.

Sandra has participated in donating hearing aid batteries for children throughout Iowa and making visits to nursing home residents regularly. She also collects used phones for the “Cell Phones for Soldiers” program and is actively involved in the Lion’s Club project to collect eye glasses and hearing aids to repurpose for those who can’t afford hearing aids or glasses. She also has advocated at various levels for closed captioning of local news. She purchased the first captioning equipment for Local ABC WOI-TV in Des Moines and continues to sponsor local closed caption for ABC 5’s daily newscasts.

Among the many projects in which Sandra has been involved throughout the years, one of her most notable projects included her work with the Hearing Loss Association of Central Iowa in creating a video to be used in training the Des Moines Police Department to aid in interacting positively with people who have difficulty hearing.

Sandra will be presented her award on May 30th by Relay Iowa Outreach Project Manager, Lori Sporrer, during a LinkedIn Quarterly Social celebrating Sandra’s 25th anniversary with Helping You Hear, LLC and Better Hearing & Speech Month in Des Moines.